Here is a list of all my purebred lambs: 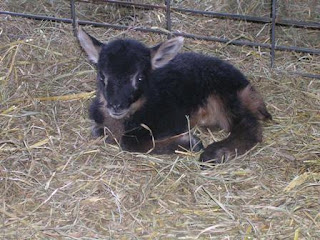 Isn't she cute? This is Gypsy's emsket (pretty sure, Mom and I both checked) gulmoget ewe. She has a good structure and a silky-soft fleece. I'm sure she's a keeper. I've already spoiled her! 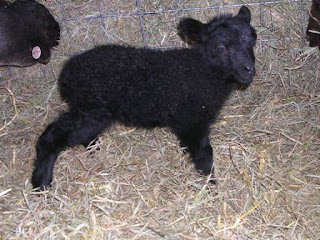 This little bear-face is Gypsy's emsket ram. He will be a dark blue emsket with a soft, silky fleece. I hope he has good horns, to match his conformation (because it's nice.) He is taking after his dad, UTS Apache. Great boy, but why couldn't he be a nice little girl? 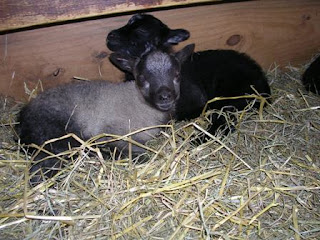 A shot of Corina's light badgerface boy. He'll be nice! He has a very soft, crimpy fleece - like both Corina and Dreamie. Great conformation and good body, too. 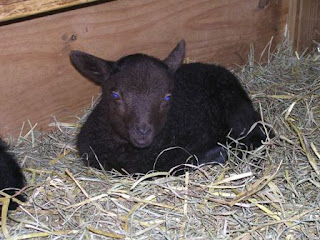 Corina's middle child, her moorit ewe. This girl has an outstanding structure already, and a crimpy fleece. Nice straight topline, good deep body, and a square backend with a perfect tail. Now why couldn't I get a picture to show all that? She was either sleeping or bouncing. All well. More pics later. 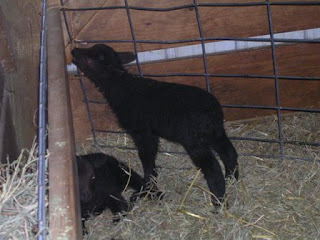 Corina's moorit ram has, as you can see, a great conformation (can you see his tiny tail?) He will be a nice moorit ram with a good fleece, definitely show quality. 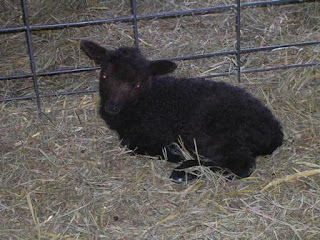 Coppelia, my moorit ewe, had two very nice, cute brown girls. This is the first one, who is bigger than her sister. She has a very silky, soft fleece, and a great conformation. Depending on what Corina's ewe looks like, she will be my replacement for somebody. But it's still way to early to tell. 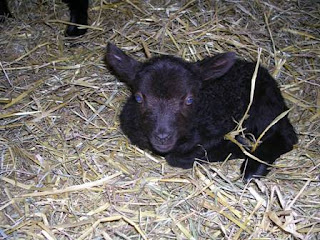 Coppelia's second ewe. She is also very soft, with more crimp than her sister, at the moment. She looks like she'll be a square ewe too.

Beautiful lambs Tori! That gulmoget ewe is a real cutie, I can see why she is spoiled already.

S'More Sheep is a separate, small flock within Under The Son Farm. Using the 1927 Shetland Breed Standard as the description of perfection, S'More stock is bred to exhibit the wonderful, unique qualities of purebred Shetland Sheep.

1927 Shetland Breed Standard
General Character and Appearance (Horned or Hornless) ... 9
Head - Good width between ears, tapering rapidly to base of nose, which should be broad and with little taper to the muzzle, hollow between cheeks and nose well marked...... 9
Face - Medium length of face from eyes to muzzle, nose prominent but not Roman, small mouth.....5
Eyes - Full, bright, and active look......3
Ears - Fine, medium size, set well back, carried slightly above the horizontal.....4
Neck - Full, tapers into a fairly broad chest ...4
Shoulders - Well set, top level with back ....6
Chest - medium width and deep .....5
Back - Level, with as much width as possible ...9
Ribs - Well sprung and well ribbed up ....4
Rump - Good width, with well tuned rounded hips ....5
Tail - Fluke tail. Wool at root forming the broad rounded [art, and tapering suddenly to barely covered fine point. This is a strong character, and any crossing is easily made out by it. Length varies according to the size of the sheep, rarely exceeds six inches, or thereby ...9
Legs of Mutton - Light, but very fine in quality ....4
Skin - Varies according to the colour of wool. In white no blue or black colouring ....2
Wool - Extra fine and soft texture, longish, wavy, and well closed. Wool on forehead and poll tapering into neck, likewise wool on cheeks. Colours : white, black or brown, moorit (from reddish to fawn). Greys (including Sheila). other known colours - Mirkface (brownish spots on face); Catmogit (dark under parts from muzzle to tail and legs), Burrit (light underparts); also Blaegit, Fleckit, and Sholmit ......20
Carriage - Alert and nimble, with a smart active gait .....2